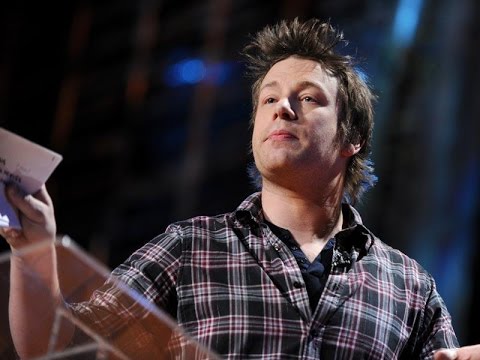 Sharing powerful stories from his anti-obesity project in Huntington, W. Va., TED Prize winner Jamie Oliver makes the case for an all-out assault on our ignorance of food.

Jamie Oliver is transforming the way we feed ourselves, and our children. Jamie Oliver has been drawn to the kitchen since he was a child working in his father’s pub-restaurant. He showed not only a precocious culinary talent but also a passion for creating (and talking about) fresh, honest, delicious food. In the past decade, the shaggy-haired “Naked Chef” of late-’90s BBC2 has built a worldwide media conglomerate of TV shows, books, cookware and magazines, all based on a formula of simple, unpretentious food that invites everyone to get busy in the kitchen. And as much as his cooking is generous, so is his business model — his Fifteen Foundation, for instance, trains young chefs from challenged backgrounds to run four of his restaurants.

Now, Oliver is using his fame and charm to bring attention to the changes that Brits and Americans need to make in their lifestyles and diet. Campaigns such as Jamie’s School Dinner, Ministry of Food and Food Revolution USA combine Olivers culinary tools, cookbooks and television, with serious activism and community organizing — to create change on both the individual and governmental level.

TEDTalks is a daily video podcast of the best talks and performances from the TED Conference, where the world’s leading thinkers and doers give the talk of their lives in 18 minutes. TED stands for Technology, Entertainment, Design, and TEDTalks cover these topics as well as science, business, development and the arts. Closed captions and translated subtitles in a variety of languages are now available on TED.com, at Watch a highlight reel of the Top 10 TEDTalks at